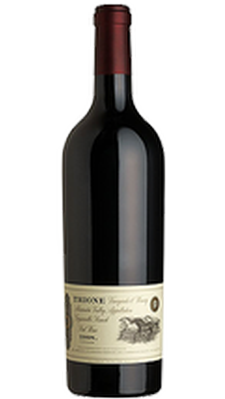 The 2011 vintage was a relatively cool one. It was a year for complexity and structure; it was also the year that we decided to pay tribute to the patriarch of the Trione Family, Henry Trione by creating his namesake blend. This wine is a combination of Cabernet Sauvignon (35%), Merlot (34%), Petit Verdot (13%), Malbec (5%), and Cabernet Franc (13%). Each wine alone would stand proudly by itself, but in concert with the other varietals expresses much more depth and complexity. Cabernet forms the base structure of the wine with Merlot adding elements of fruit and softness to the body of the wine. The Petit Verdot, Malbec, and Cabernet Franc all add special elements of fruit, spice, and depth of color and richness that combine to be greater than the sum of the parts.

It was a relatively mild year that brought ripe flavors in from the Alexander Valley for those who managed a light crop and brought the grapes in early to the winery. Early rains meant that those who picked on time benefited.

Each variety was fermented separately in small open top vessels. The fermentations were done using a unique cap irrigation device that brings in air as the free-run wine is being circulated over the cap during the peak of fermentation. This technique ensures the binding of tannins with the color compounds found in the grapes as well as maximizing proper yeast cell health and viability.

This wine is soft, supple, and velvety on initial impact. Aromas and flavors of spice, black currants, and blackberry pie. The finish is long and lingering with integrated hints of cedar and cigar box. This Bordeaux style blend will develop for the next 6-7 years.